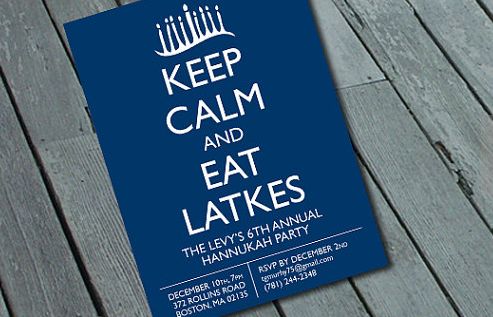 This Holiday Invitation Advises You to Eat Latkes

Vasiliki Marapas — November 27, 2014 — Art & Design
References: etsy & etsy
Share on Facebook Share on Twitter Share on LinkedIn Share on Pinterest
This Holiday invitation puts a Hanukkah-themed spin on the "Keep Calm and Carry On" meme. Instead of the original phrase, the playful card reads, "Keep Calm and Eat Latkes" across the front. If you're hosting a Hanukkah gathering and want to invite your best pals, this card is a no-brainer.

For those who aren't aware, latkes are absolutely delicious fried potato pancakes that are seasoned with onion and garlic. They are traditionally enjoyed by Jewish people during the Hanukkah festival.

Interestingly enough, the 'Keep Calm and carry On' phrase was originally used on motivational posters during the Second World War. It was recently repopularized, and has been reappropriated in countless other contexts, from Internet humor to motivational merchandise.
3
Score
Popularity
Activity
Freshness
Access Advisory Services