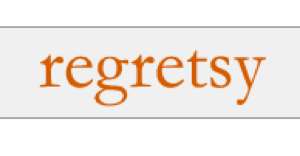 Note: Since Trend Hunter conducted this interview, it has been revealed that Helen Killer is actually April Winchell. Her identity was revealed once she signed with Random House to make a Regretsy book.

1. How did you get involved in Regretsy and what motivates you to continue?

I had the idea in May of this year, when a friend sent a horrible kitchen rug as a housewarming gift (with his “regrets”). It just clicked. I immediately looked up Regretsy.com, thinking it had to be taken. I almost fell off my chair when I saw it was available. I grabbed it and promptly forgot about the whole thing. In September, I found the email confirming the domain purchase and was reminded of it all over again. I spent a few days putting up posts, and on October 1, I decided to take it live.

I also decided to do it anonymously, because I have a bit of a profile in the entertainment business, and I run another web site with a small but mighty fan base. I thought it might be more interesting to see how it developed virally, without benefit or hindrance of people who knew me. I didn’t tell anyone except one or two friends and my fiance.

The first day it went live, it got picked up on Buzzfeed. After that came Jezebel, Gawker, and most incredibly, Wall Street Journal. By the end of the first week, I had 15 million hits. By the second week, I had broken through Alexa’s top 10,000, beating Cake Wrecks by a big percentage. And by the end of the first month, Regretsy was rated 4514 on Alexa, which was mind blowing.

And that’s actually what has kept me motivated to continue; the amazing success it’s having as a true viral hit. No money, no advertisers for the first month, no PR, no connections, not even my own name.  The biggest referrer is no referrer, and the second is Facebook. It’s all word of mouth, which is amazing. In fact, my own sister sent me a link to the site, saying that she thought I’d like it.

2. How significant are the topics of cool hunting and trend spotting in the world of blogging?

Speaking for me personally, trends are always going to be important because that’s what I go after in my humor. On my other site, and in my writing, I’m very critical of pop culture, advertising and entertainment; three mediums I’ve worked in extensively.

But some things just happen without that kind of awareness, and Regretsy is a good example. I really had no idea how big crafting was in this country when I decided to undertake this. I never could have predicted the interest. And I had no inkling that there was so much unrest and strife within that community, and that so many people were waiting for someone to say what they were thinking. One blog called Regretsy, “The site everyone wanted, but was too afraid to do.” I had zero idea that mindset was out there. It was a perfect storm.

So yes, it pays to be observant and on the bleeding edge of things. But never underestimate the power of dumb luck.

For something to really be a trend, it has to work on two levels.

First, it has to resonate with a very large percentage of the population very quickly. And secondly, people have to be able to make money on it.

Reality television is a good example. It was a new form of television, but it was about us. We didn’t have to be brought up to speed, it was already about something we understood. It was new, so there was some excitement in that, but it was safe at the same time.

And comparatively speaking, it’s cheap. It costs a fraction of what scripted television costs to make, and much of that can be underwritten with relevant advertisers, like say, Macy’s and Project Runway, or Glad products and Top Chef.

If you took away the potential for revenue by making it more expensive to produce, or you decreased your audience by focusing the show on something more inside, you wouldn’t have a trend. You’d have Project Greenlight.

Ultimately, cool is someone or something that doesn’t need your approval.

Ironically, that aloofness creates so much interest that the cool thing in question becomes a trend.  And trends, for the most part, aren’t that cool.

5. Do you need a culture of innovation to create something that is cool?

6. What is the best way to create an infectious idea, product or service?

Tell the truth. Every time you come out and say what people are already thinking, it’s like you reinvented the wheel.

My most successful endeavors have been the ones where I was allowed to tell the unvarnished truth. It always seems like such a terrifying risk, but it’s all people want to hear. We live in a culture of buzzwords and political correctness and everybody gets a trophy, and we’re all looking at each other and thinking, “This is a load of crap, right?” And the first person to say it is the hero.

The greatest compliment I get, and the one that tells me I’m on the right track, is when people say, “You took the words right out of my mouth.” That’s what makes people tell their friends.

7. What is the key to innovation?

I had a meeting once with a television producer who asked me to come in and pitch a bunch of ideas to him. Halfway through my spiel he said, “Why are you pitching projects for other people to write?” I explained that I wasn’t anyone, and my function was to support the careers of people who were. He said, “You’re never going to get anywhere until you understand that you are someone.”

I think sometimes it is that simple; to just brush off the preconceived notions you have about your station or place in the world, and see yourself as the main event. Innovation is about being without limits, and most of our limitations are self imposed.

8. What are the most important trends you see in your industry?

Well, if we’re talking about blogs, I have to say the single-serving sort of aggregate model has become a powerful tool. A reporter recently asked me what blogs I liked to read, and I realized that I don’t really like to read blogs very much at all anymore. My attention span and method of absorbing information has changed, and I prefer arresting visuals, short pieces, quick humor, and things I can share easily.

Twitter and texting are interesting examples of the way this process has changed. We have 140 characters to share an idea, and if we want to share someone else’s idea, we have even fewer characters available.  We even have to shorten URLs to be able to repeat them. We are learning an economy of words that actually makes us better writers and communicators in some ways. And we have to embrace these methods because that’s the way people spread the word about your work.

9. What are your ambitions for Regretsy?

It’s just not a chance you get very often, and I’m trying to be very careful. The Internet is like lightning, and things are over in seconds. I won’t get any email for a few minutes and I’ll think, “Well, I guess it’s finished.” Then I look at Facebook and I have 11,000 fans.

It’s quite a ride. I guess my biggest ambition at this point is surviving it.

10. What is an example of a time where you have thrown away an existing idea to force yourself to find something new?

It happens all the time. I’m rarely so married to an idea that I won’t jettison it if I feel like I’m spinning my wheels. But I also find that the answer is usually within the first few tries. Sometimes it really is your first idea, and sometimes it’s your fourth or fifth. But it’s never your 50th. When I start to struggle, it’s usually a sign that there is something inherently flawed in my premise.

11. How do you reset yourself to be creative? Do you have any rituals?

I’m very much influenced by my environment. If things are too cluttered or dirty I start getting anxious and depressed. Putting things away and giving myself a clean surface makes me feel much better. I also tend to solve problems in the shower or when I’m driving.

One of the most useful things I can do is stop working, though in the moment it seems counter intuitive, to say the least. But if I go for a walk or go grocery shopping, it resets me pretty quickly. I call it “Being in the world”.

12. Professionally, what do you want to be doing or studying in 10 years?

Professionally, my aspirations never change. All I’ve ever wanted to do is make people laugh.

13. What are your most important hobbies?

Believe it or not, I sometimes hand sew plush toys to benefit charity. And I am absolutely terrible at it.
5.5
Score
Popularity
Activity
Freshness
View Innovation Webinars

12 Regrettable Innovations
From Twitter Remorse to Blogs for Brutal Tattoos