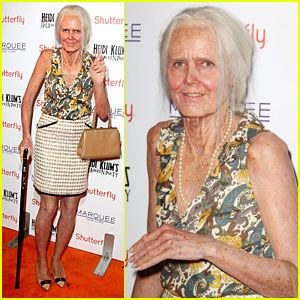 Vasiliki Marapas — November 1, 2013 — Special
References: justjared & thecitizensoffashion
Share on Facebook Share on Twitter Share on LinkedIn Share on Pinterest
Heidi Klum's Halloween Costume this year appeared to defy the principles of time, physics and gravity, as the once-svelte German model transformed herself into an 80-year old woman. Klum is completely unrecognizable, with deep-set wrinkles, white hair and varicose veins. It's hard to believe that underneath all that makeup, this grandma boasts a Victoria Secret-worthy physique and flawless complexion. Klum walked the red carpet supporting her now-frail frame with a cane. Before unveiling her costume, Klum hinted at her impending metamorphosis by tweeting, “Ok guys……..I am going into the future.”

Klum is the unparalelled queen of Halloween, putting in more time and effort than any other celebrity out there, and it doesn't look like she'll be relinquishing her crown anytime soon. Her past costumes include an extravagant Cleopatra, a decrepit corpse, and an ape.
1.8
Score
Popularity
Activity
Freshness
Get Better and Faster