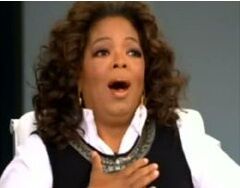 Sandra Winn — November 4, 2008 — Social Good
References: youtube
Share on Facebook Share on Twitter Share on LinkedIn Share on Pinterest
Oprah’s electronic voting fiasco which, considering her re-telling of the ordeal that she practically had a heart failure, occurred when she double-checked her vote for president (she didn’t say who, but we can safely assume that Oprah voted for Barack Obama) and noticed the machine didn’t count it. Yikes!

Unless you live in the boondocks, you are probably aware of early voting problems that have happened due to not being a registered voter, postulations of voter fraud and even stories of votes not being counted, as in Oprah’s case.

Unfortunately, voting issues have plagued all democracies, even back in the day when they were put in a box with a lock. Even with advanced technology, some glitches will always occur, and even more troubling, tampering still happens as well. I echo Oprah’s sentiments when she says to double check your vote.

I’d also like to add that if you have to fill-in an oval or square, color it in fully and if you mess-up, ask for another ballot. Seriously, I met a young second time voter the other day who said that she voted for the first time in 2004 and put a check in the box rather than filled it in because she didn’t know any better.
1.6
Score
Popularity
Activity
Freshness
Get Better and Faster