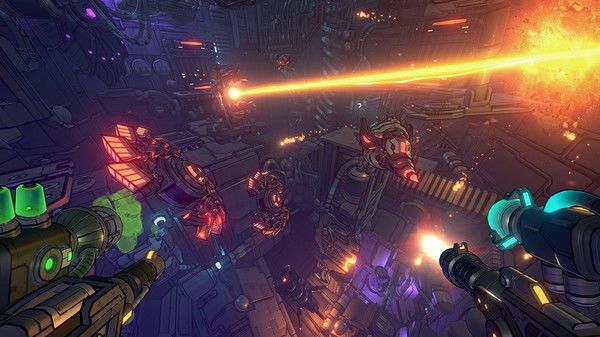 Justin Lam — March 23, 2018 — Tech
References: store.steampowered & engadget
Share on Facebook Share on Twitter Share on LinkedIn Share on Pinterest
First-person shooter games are dime a dozen, but the Gunhead game is looking to revitalize the genre with a stylish artistic twist. The open world action title is being developed by Alientrap, perhaps best known for its gorgeous indie 2D platformer Apotheon. The gorgeous Gunhead was first shown quietly at SXSW 2018, but its recent showing at GDC 2018 truly demos the innovation behind the game. The artistic visuals of the Gunhead game is reminiscent of A Scanner Darkly, the animated sci-fi thriller from 2006, but also manages to exude a cartoonish feel. Dark backgrounds make the vibrant colors pop as the player travel between spaceships and exhilarating gun fights.

The inspiration to create Gunhead came from the developer's need to create a true open-world game. The focus, aside from the striking visuals, is being placed on moment-to-moment action with players having to make strategic decisions and deliberate actions. At times the Gunhead game feels like a mix between Borderlands or Fallout with an interesting loot system, but ramps up the action with striking visuals.
3.5
Score
Popularity
Activity
Freshness
Get Trend Hunter Dashboard