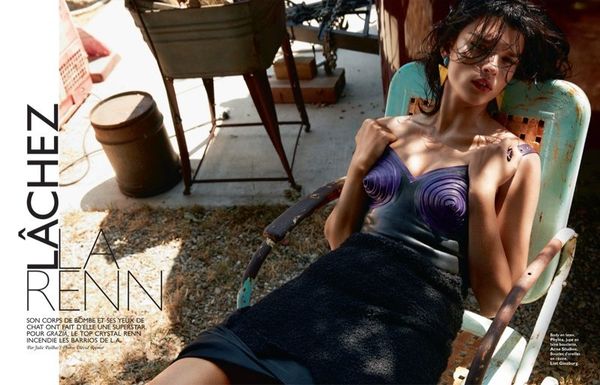 Meghan Young — January 16, 2014 — Fashion
References: grazia.fr & fashiongonerogue
Share on Facebook Share on Twitter Share on LinkedIn Share on Pinterest
The Grazia France January 2014 editorial might take place in a trailer park, but it is undeniable that it is anything but glamorous. Of course, this has a lot to do with stylist Julie Pailhas, who handpicked a range of elegant gowns and more eclectic pieces from the likes of Miu Miu, Prada and Celine. Not to mention model Crystal Renn, who lends her darkly regal features to the photoshoot.

Appropriately titled 'Lachez la Renn,' which means 'Release Renn' in French, the Grazia France January 2014 editorial was shot by photographer David Roemer. It was captured in a sweltering heat, or at least what appears to be a hot day by the looks of Renn's sweaty skin and hair, courtesy of makeup artist Lottie and hair stylist Riad Azar.
3.8
Score
Popularity
Activity
Freshness
Access Advisory Services