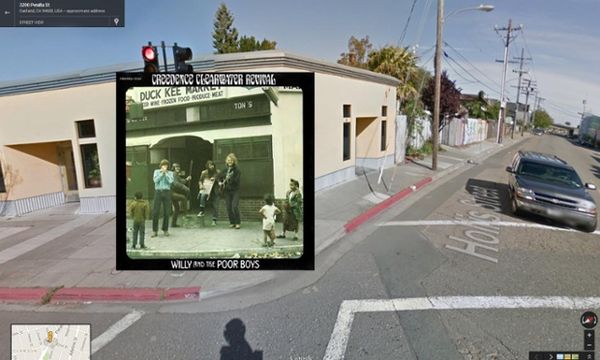 Nina Shewchuk — April 11, 2014 — Tech
References: theguardian & avclub
Share on Facebook Share on Twitter Share on LinkedIn Share on Pinterest
Despite the long-standing tension between the Internet and the music industry, artist Halley Docherty has found a way to harmoniously unite the two, thanks to a project commissioned by British newspaper The Guardian.  Following up on a series in which he superimposed historical paintings of cities around the world in their modern-day locations using Google Street View, Docherty’s latest work gives classic album covers the same treatment.

Many of the mash-ups illustrate the obvious changes that occur in cities over the course of several decades. The dingy clothing store from which the Beastie Boys’ 1989 album Paul’s Boutique derived its title has been given a facelift as its surroundings have become gentrified.  Across the pond, the impending Nine Elms restoration project promises to render Pink Floyd’s Animals cover obsolete.

As many of the images featured in this series echo the changes modern technology has made to the record industry, there is one photo that stands out -- that of the iconic Abbey Road. Immortalized by the Beatles album of the same name, Abbey Road is carefully maintained so that it looks exactly the way it did in 1969. London’s Westminster council repaints the wall next to the street’s crossing every three months to cover any graffiti, and mounts the street signs high above the street to prevent vandalism. While many hardcore music junkies scorn the damage sustained to the music industry by the Internet, Docherty’s images prove that sometimes, old and new technologies can peacefully co-exist.