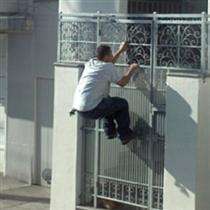 Greg Ponesse — September 15, 2007 — Pop Culture
References: news.portalit.net
Share on Facebook Share on Twitter Share on LinkedIn Share on Pinterest
When Trend Hunter first wrote about Google Street View in May, we thought it was just a cool new way to view very detailed city maps, but now the application is getting some unexpected attention. Google's service is receiving criticism by people who consider the application to be an invasion of privacy. Images of houses, vehicles and even faces are being captured without people's consent or even awareness. The images are then uploaded online where they become public domain for all to see.

"Having random-made snapshots of people made available for everyone to see may contradict Canada's 2004 Personal Information Protection and Electronic Documents Act," reported Portalit. "The law states clear: businesses that wish to collect, use or disclose personal information about people will do so only if the individual give them their consent. Furthermore, the information will be used or disclosed only for the purpose for which individuals gave consent."

Your affair wouldn't be so secret if Google's cameras busted you and your fling steaming it up at the end of a rural road now, would it? Let's face it, we're all being watched all the time. We belong to the last generations that will enjoy the luxury of privacy.

"While Google may defend itself by saying that the company allows viewers to request that certain images be removed, but this might not be enough to clear the company. First of all, individuals may not be aware that their images have been made available on Street View. Second, the basic idea of the Canadian law is to prevent such things from happening, because the individuals' privacy rights may already have been affected by the time the images are removed."