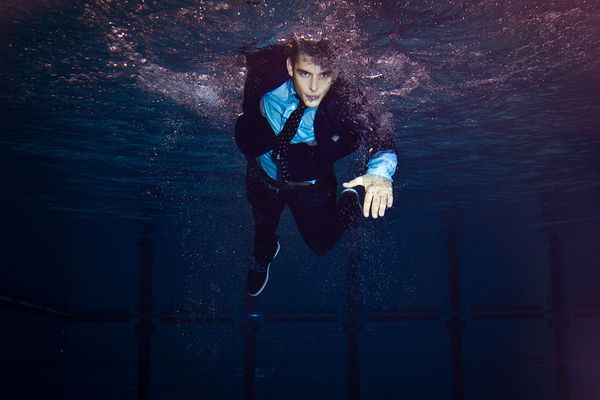 Megan Facciuolo — May 7, 2014 — Fashion
References: thegoodpeople.nl & hypebeast
Share on Facebook Share on Twitter Share on LinkedIn Share on Pinterest
GoodPeople took a dive off the deep-end for its GoodPeople 2014 Spring/Summer Lookbook -- literally. The collection of mens' clothing is modelled in a remote indoor pool location. The model featured is snapped swimming the front-stroke in an olympic-sized pool and is fully dressed to the nines in GoodPeople apparel. He also posed on sky-high diving boards for arial shots that overlook him and the pool below.

The collection was inspired by iconic French explorer Jacques Cousteau and consists of denim, blazers, t-shirts, polos and a series of fitted, brightly colored chinos and shorts. The chlorine-soaked clothing of the lookbook features the majority of the collection and the pieces boast bold marine colors like navy blue, red, beige, jellyfish pink and seaweed green. The clothing is even specifically made with faded color to appear as if they spent a day at sea.
2.2
Score
Popularity
Activity
Freshness
Get the 2023 Trend Report FREE