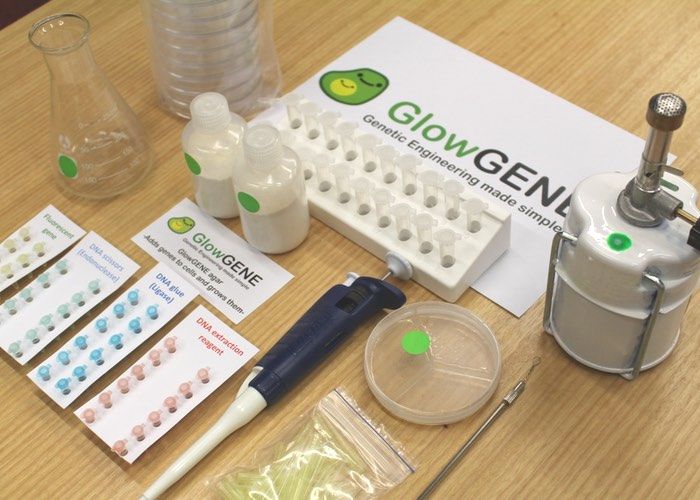 Michael Hemsworth — September 15, 2015 — Tech
References: kickstarter & geeky-gadgets
Share on Facebook Share on Twitter Share on LinkedIn Share on Pinterest
Things are starting to sound a little bit like Jurassic Park with the release of the GlowGene Kit, which allows amateur scientists to create living biological cells from their very own home. Currently funding on Kickstarter, the GlowGene Kit allows novice scientists to create cells that can eat plastic, create fuel or even glow, according to the kits' creators.

The GlowGene Kit works by providing the owner with samples to work with and the utilities to do so; simply select the kind of cell you'd like to go and replicate, toss it in a test tube and you're on your way. Describing the capabilities, the creators of the GlowGene kit explain, "GlowGene lets you extract genes from other lifeforms and put their DNA inside your cells, giving them traits of that animal. You can make glowing cells using jellyfish DNA, red cells that produce hemoglobin, cells that create ethanol, cells that eat plastic, cells that produce light and so on."
3.5
Score
Popularity
Activity
Freshness
View Innovation Webinars