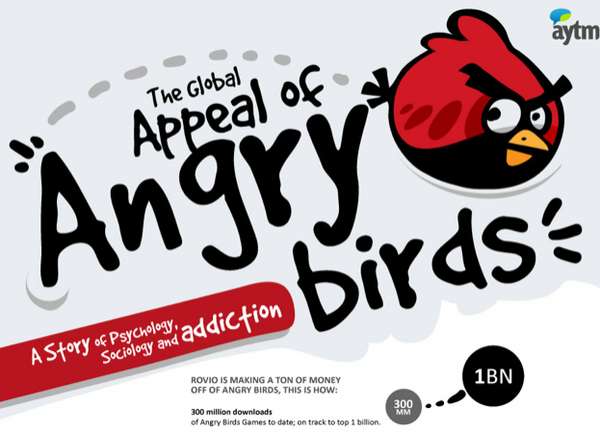 Marie C. Hudson — September 13, 2011 — Tech
References: aytm & dailyinfographic
Share on Facebook Share on Twitter Share on LinkedIn Share on Pinterest
Whether you're an iPhone, iPod Touch, iPad, Android or PC user, you know how difficult it is to avoid the addictive avian app, and 'The Global Appeal of Angry Birds' sets to find out why. The illustrated chart, created by AYTM, dissects the fun, feathery game, taking a psychological and sociological approach to understand its users and the addictive elements of the app.

What I found most shocking (or impressive) from this avian-charged chart is the fact that Rovio, the company that created and owns the popular game, is currently worth over $1 billion -- as much as JetBlue Airways.

With only 18% of Angry Birds users claiming to have never felt addicted to the game, it's no wonder it has so quickly become one of the most popular of all the smarphone gaming apps. Check out 'The Global Appeal of Angry Birds' for some quick tips and tidbits on the awesome avian app.
6.1
Score
Popularity
Activity
Freshness
Jeremy Gutsche Keynote Speaker