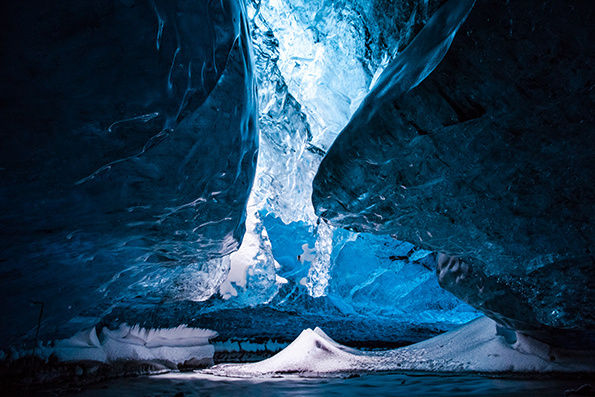 Vasiliki Marapas — March 10, 2014 — Fashion
References: katefriend & itsnicethat
Share on Facebook Share on Twitter Share on LinkedIn Share on Pinterest
Kate Friend has stepped out of her professional comfort zone in order to create a magnificent series of glacier photography. Best known for her sophisticated fashion editorials in publications such as Dazed Digital, The Sunday Times and 'MOTHER' (a magazine of her own creation,) Friend chose to try something new and adventure to Iceland to photograph beneath the island's largest glacier. In fact, the glacier, named Vatnajökull, boasts the largest glacier mass in Europe and covers approximately 8,000 sq. km.

The result is a spine-tingling collection of photos documenting the cavernous interior chambers of Vatnajökull. Friend explains that the series is an accurate (and non-color altered) portrayal of her journey, saying, “The story follows a timeline, from the winding and very lonely road through volcanic plains and gale force winds, to the entrance of the ice cave (a crack in the glacial surface), and to the cathedral-like interior of the glacier.”

Friend was motivated to embark on the journey due to the worrisome melting rates that will eradicate the glaciers entirely within the next century.
1.3
Score
Popularity
Activity
Freshness
Get Trend Hunter Dashboard