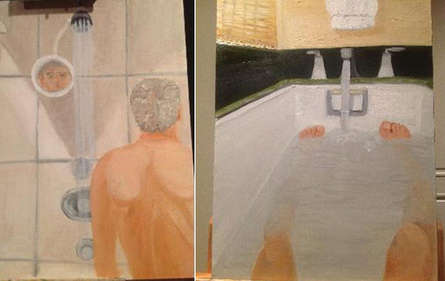 These Paintings Showcase George W. Bush in the Nude

While we could talk about the person who hacked the president's computer or the many questionable decisions the former president made during his time in the White House, I would rather discuss how mysterious and simply perplexing George Bush's paintings are.

There are two parts to these puzzling paintings, and in both portraits Bush is very much alone in a bathroom. The first painting showcases him in the shower with his back turned, while shaving his face. The water is running and he looks quietly lost and engaged in thought, leaving us questioning what this former president might of been thinking of at the time. In the second painting, George is in a tub and we can only see some of his thighs and toes, while the rest of his body is submerged under water. These paintings offer up a revealing and slightly disturbing look at one of the most controversial former U.S presidents of all time.
3.3
Score
Popularity
Activity
Freshness
Jeremy Gutsche Keynote Speaker