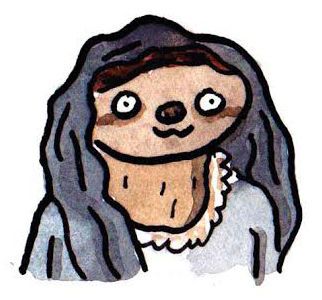 These Game of Thrones Sloths are Watercolor Paintings

Megan Facciuolo — April 14, 2014 — Pop Culture
References: shittywatercolour & walyou
Share on Facebook Share on Twitter Share on LinkedIn Share on Pinterest
Oddly, Game of Thrones sloths have been taking over the Internet -- both graphic and photoshopped. Now, the website ShittyWaterColour.com has turned the popular medieval TV characters into sloths in its own way. Using water color paints, the artist depicted several characters from the show's noble houses, including the House of Stark, the House of Lannister and the House of Arryn.

There have been many Game of Thrones parodies, novelty products, adaptations and illustrations that have arisen since the HBO show's debut a few years ago. However, the sloth take on things is the most unique by far. Sloths are known to be one of the most lazy and dopey animals and that's what makes these paintings so comical; the animals are a far cry from Game of Thrones' active characters.
1.6
Score
Popularity
Activity
Freshness
Jeremy Gutsche Keynote Speaker