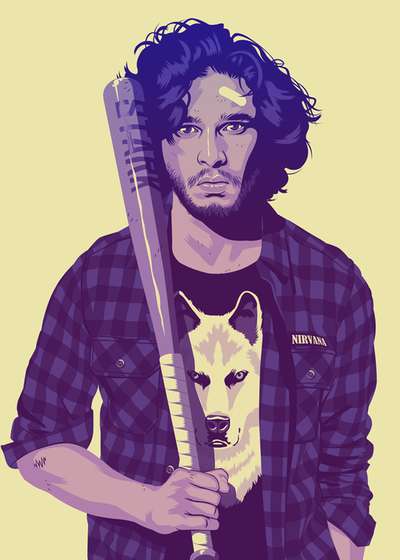 The Game of Thrones 90s-Themed Drawings are Nostalgically Hip

While still capturing the graphic violence and gory undertones of the show, Moshi-Kun transcends the medieval brutality of Game of Thrones by depicting the characters as part of a 90s gang. Joffery Lannister looks like a Beastie boy with his iconic eerie facial expression while rocks a punk-esque fitted cap, a funky patterned t-shirt and a gun carefully tucked into his pants. Jamie Lannister looks like slimy a 90s mob leader with his thin stash, shiny white jacket and fierce gun. Daenerys Targaryen is shown as a fun-loving hippy girl holding ferrets in the place of dragons.

Jon Snow is my favorite of them all, rocking bad boy cuts and bruises, a Nirvana button-up and a baseball bat. In all, the Game of Thrones 90s gangster mash-up is fun, quirky and a great tribute to the bloodthirsty themes of the show.