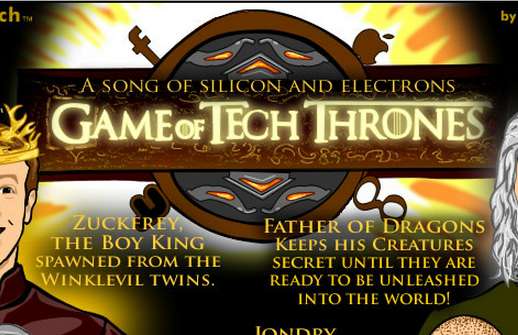 Jennifer Gosnell — June 11, 2012 — Pop Culture
References: mashable
The hilarious 'Game of Tech Thrones' cartoon is a hilarious representation of many media and tech figures of today. From Mark Zuckerberg of Facebook to Pete Cashmore of Mashable, many of the prominent figures of the 21st century online world are prominent in the great cartoon that not only gives them fantastic medieval names, but also lays out their personality traits and skills.

For Mark Zuckerberg, or rather "Zuckfrey," is "the boy King who spawned from the Winkevil twins." The comic plays on the crazy popular TV series 'Game of Thrones' that has blown up over the past year. Set in medieval times, 'Game of Tech Thrones' has given the movers and shakers of the 21st century a sweet makeover.
2.8
Score
Popularity
Activity
Freshness