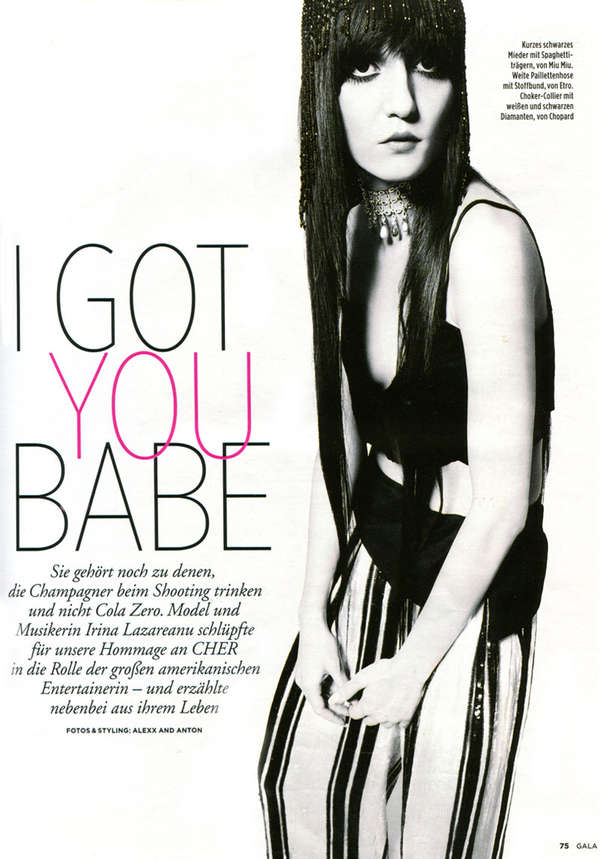 The Gala Magazine 'I Got You Babe' Photoshoot Stars Irina Lazareanu

Meghan Young — April 3, 2013 — Fashion
References: gala.de & fashiongonerogue
Share on Facebook Share on Twitter Share on LinkedIn Share on Pinterest
The Gala Magazine 'I Got You Babe' editorial pays homage to American singer and actress Cher. A big personality with even bigger eyes, model Irina Lazareanu is perfectly cast as a young version of the 66-year-old star. Captured in black and white for a more glamorous appeal, the photoshoot embraces Cher's beautiful hippie spirit and pension for fun and sometimes outrageous outfits.

Shot and styled by Alexx and Anton, a creative duo based in Berlin, Germany, the Gala Magazine 'I Got You Babe' editorial is influenced by the era in which Cher was at the height of her career: The seventies. The Romanian-Canadian fashion model was clad in a sexy retro wardrobe featuring the likes of Chanel, Hermés, Chopard and Azzedine Alaia. The looks were perfected by beauty artist Jochen Pahs.
4.7
Score
Popularity
Activity
Freshness
Get Better and Faster