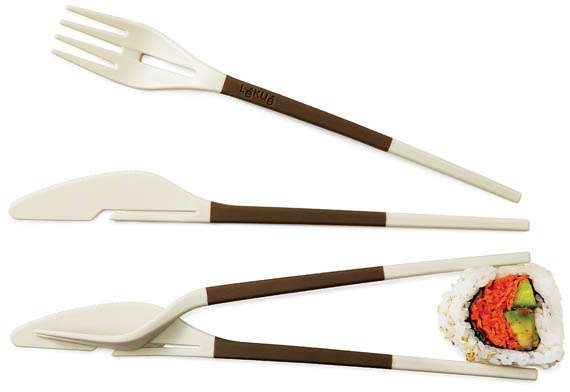 The Fork-Knife Chopsticks Allow Users to Learn Without Going Hungry

Susan Keefe — November 23, 2011 — Art & Design
References: uncommongoods & incrediblethings
Share on Facebook Share on Twitter Share on LinkedIn Share on Pinterest
The road to mastering the fine art of balancing one's food between two sticks has many bumps, but have no fear, because these ingenious Fork-Knife Chopsticks from Uncommon Goods will see you through every hurdle. Outfitted with the prongs of a fork and the safe blade of a butter knife, the Fork-Knife Chopsticks allow you to practice your chopsticks skills without starving.

After several failed attempts with chopsticks, you've likely reached the end of your tether. Having not successfully transferred one morsel of food to your very hungry mouth, you have the choice to throw in the towel and put your western utensils to use without have to dirty another set. The Fork-Knife Chopsticks act as training wheels until you master the Asian utensils. Now, you'll never throw another pair of chopsticks out the window in despair.

Creative and clever, the Fork-Knife Chopsticks will keep you from giving up on sushi altogether.
0.9
Score
Popularity
Activity
Freshness
View Innovation Webinars