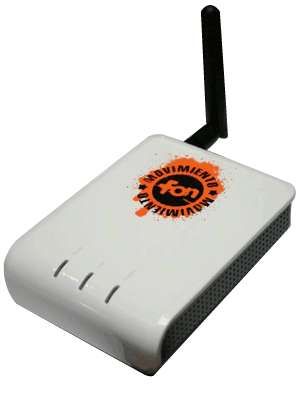 How do you become part of the FON Family? Well first you need "LA FONERA", that is your own
FON WiFi router that easily plugs into your broadband internet connection, and turns it into a WiFi access point. La Fonera is a Social Router because as soon as you have plugged it in, you are immediately part of a community. Members are required to "share" their access points from home and in return get free WiFi connections. As a Fon Member you can also personalize the page that others see, when they log on through your access point.

There are three types of FON Members, there is "The Linus"; Linus's enjoy free roaming and give their WiFi access to other members for Free, in return.

Aliens are non-members who are able to Login and use the FON Community for a small daily rate, $3 (LA FONERA is offered cheaply, $5, because of the Aliens who help fund the community).

The Bill is a Member who is in Business for themselves. They can advertise their company or product details on their FON WiFi Login Access Page, and are entitled to 50% of the funds raised by Aliens, who use them as Access Points, although Bill's do not have free roaming.

Once you have established who you are in the FON Community and have purchased LA FONERA, register on the Fon Website and download the compatible Router Software, to become part of a global WiFi network. Search Fon Maps for thousands of global wireless access points.

FON is in Beta stage at the moment and is open to Linus members only for now. There are offices in Spain (Headquarters), USA, Europe, Finland, Sweden, France, Asia, Japan, China, & Korea.

LA FONERA was handed out for free in San Francisco on Friday, October 27th, in a bid to establish a FON community there.

Usually WiFi networks are built on partnerships between cities and corporate companies. This has been a popular strategy in recent years, but the downside, is that wireless access is usually confined within the borders of the participating city. Network infrastructure, upgrades and maintainance, is incredibly expensive. By 2010, according to MuniWireless.com, it was mentioned in a recent report by them, that more than $3billion will be spent on such Network Infrastructures. FONs' solution is easily deployed at very little cost to a city or its population. If all 400 million, worldwide WiFi connections joined the FON community, local networks would not need to be built, and there would be worldwide coverage. ( mentioned in a report by CNET)

FON challenges the way traditional corporate businesses operate. In much the same mode as Skype or companies such as the South African "Mixit" (mentioned before in my portfolio), where a lot is given away for free, as an interactive global community network project. Add-ons and extra's are charged out later. High user volumes, incentives, user-friendly technology, satisfied and dependant customers, are what drives the success of this kind of business model trend.

Google and Skype have endorsed the Fon concept, there is even a Skype Fon, a wireless handset soon to be launched; that allows free phone calls using Fon wireless access points. All the above factors combine to indicate a successful venture for the FON Team.

Why pay for the internet, when you can get it for free, anywhere in the world. Remember your FON Username and Password, and Login where ever there is a FON wireless Access point. The Community Motto should be "Do Good By Sharing"!
3.2
Score
Popularity
Activity
Freshness
View Innovation Webinars