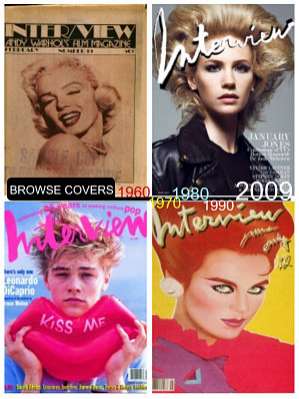 Interview Magazine is known for its complimentary issues given to the “in-crowd” as freebies to lure more contributions to the magazine, so as to attract potential new advertisers.

The Interview Magazine website does the same for the online community. As a magazine founded by artists Andy Warhol and Gerard Malanga in 1969, its cutting-edge graphics covers for magazines issues from 1970 to present can be browsed to marvel over.

One part of the website’s archives, the Flashback! Interview, has a compilation of vintage photos of Hollywood’s hottest stars (from A-Z) from when they were just beginning to shimmer on the scene. Here are some of my favorites:

22-year-old Angelina Jolie, June 1997 issue: "Now I have nothing against anything I’ve been in before, because I love all sides of me, but I have been experimenting more with that lovely woman side. In this age of feminism, I would hate for the whole gentlemen and ladies things to be lost."

21-year-old Cameron Diaz, August 1994 issue: "Whatever success people have in a field, it’s a result of hard work. If you ultimately succeed in one place, you must have worked hard there or somewhere else.