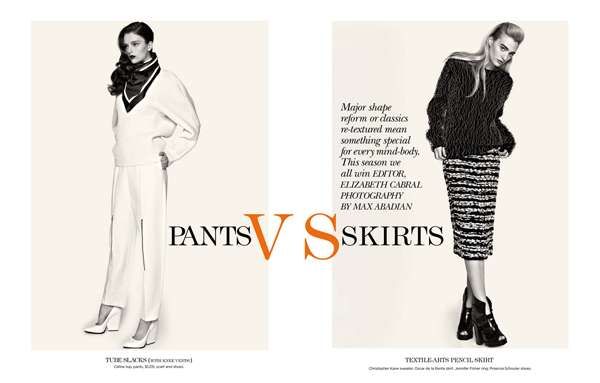 Meghan Young — October 5, 2012 — Fashion
References: flare & latestfashioneditorials
Share on Facebook Share on Twitter Share on LinkedIn Share on Pinterest
There are a lot of elements that make up the modern woman, one of the more superficial ones being pants, but with the ladylike fashion fad in full effect, editorials such as Flare 'Pants vs Skirts' are extremely relevant. It addresses the two options for women who want to balance what could be opposing styles. Nevertheless, the photoshoot does show that femininity is just as powerful of masculinity.

Shot by photographer Max Abadian, the Flare 'Pants vs Skirts' editorial is set to appear in the November 2012 issue of the magazine. It stars models Addison Gill and Cailin Hill. They were styled by Elizabeth Cabral, who pulled pieces from the racks of such labels as Gucci, Banana Republic, Prada, Louis Vuitton, and Alexander Wang. Susana Hong and Simone Otis were on beauty duty.
5.3
Score
Popularity
Activity
Freshness
Get Better and Faster