Mints For the Ultra Hip

Breath Mints for Pets
Next
Set of
Related
Ideas 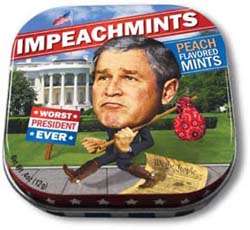 With comical names such as “National Ebarassmints,” “Indictmints” and “Impeachmints,” these tasty treats are some of the creative gifts created by the Unemployed Philosophers’ Guild. The UPG donates part of their profits to such charities as CJA (The Center For Justice and Accountability), Women for Afghan Women, Doctors Without Borders, New Yorkers Against Gun Violence, and Kids For A Better Future.
1.8
Score
Popularity
Activity
Freshness
Get the 2021 Trend Report FREE