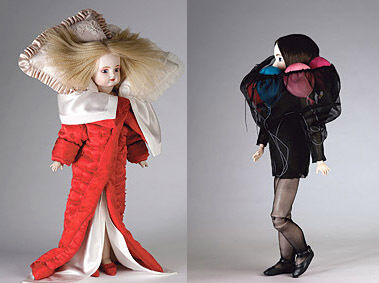 mediterranean — June 4, 2008 — Pop Culture
References: telegraph
Share on Facebook Share on Twitter Share on LinkedIn Share on Pinterest
The kings of peculiar fashion, Viktor & Rolf, celebrate their unique work of the last 10 years with an exhibition at the Barbican Art Gallery in London. Holding true to their reputation, they are not using models or mannequins, but are dressing two foot tall dolls in miniature remakes of their greatest designs.

The head of each doll is made by a Belgian expert who fires bisque faces traditionally. The hair and make-up replicate the look of the models when the outfit was first introduced in the show. And if you thought having the outfit smaller makes it easier to make, you are mistaken; each dress reportedly took double the time a full-size one takes to make.

So why dolls? They actually go back to the start of V&R's career. After winning the 1993 HyÃ¨res young designer competition together in France, they went back to Holland and imagined everything they wanted to achieve in fashion. They visualized it with a collection, called Launch, on a "doll that had a wardrobe, a catwalk and a studio of its own."

Viktor Horsting said, "We are very analytical. We thought, let's just visualise it for ourselves. There's a book called The Secret - a self-help book that's a big hit now. It's about projecting and visualising the things you want to make happen. And then you can make them happen. I read it recently and thought, that's what we did."
3.2
Score
Popularity
Activity
Freshness
Get Better and Faster