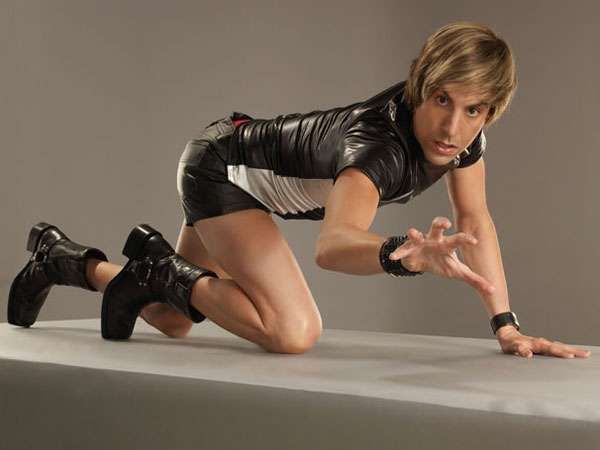 The MTV Video Awards Stunt With Bruno & Eminem Was Rehearsed

Edgar Griggs — June 3, 2009 — Pop Culture
References: movies.yahoo
Share on Facebook Share on Twitter Share on LinkedIn Share on Pinterest
On the night of the 2009 MTV Video Awards, no one was ready to see Bruno, a character created by Sacha Baron Cohen, descend from the sky dressed up in feather laden wings. If that wasn’t enough to get the crowd’s attention, the harness holding up Bruno “malfunctioned” and the fashionista was propelled towards an apparently unsuspecting Eminem.

As most people know, Eminem is known to have a rather tough exterior, and likes to keep a certain mystique about himself that reflects that. Having a grown man in wings drop down on your head, crotch first, would definitely not work towards that end. The rapper and his entourage seemed to be caught unaware, and after extracting himself from the winged divo, Eminem and his posse stormed out of the theater. The internet community was abuzz as to what would be the destiny of the world renown comedian. Would there be assault charges filed? Would Eminem create a new rap to talk about his recent disgrace?

Well, now we can put all our curiosities to rest. This just in: THE WHOLE THING WAS STAGED! As hinted at in a previous TrendHunter trend, the whole thing seemed to have been staged. Thanks to a report published on Yahoo! News, we now have proof of this, and how it was all put together.

Turns out Eminem and Sacha Baron Cohen had gotten together to rehearse the sketch. A writer at MTV leaked the details of the story.

Paris Hilton was to be the original “butt” of the joke, but she declined. Eminem was a good sport about the whole thing, and provided a stellar performance, as the buzz that the incident created in the media proved hands down.

MTV has been known to provide shocking events in the past, but this one took the cake, and stole the show. Great job!
3.8
Score
Popularity
Activity
Freshness
View Innovation Webinars