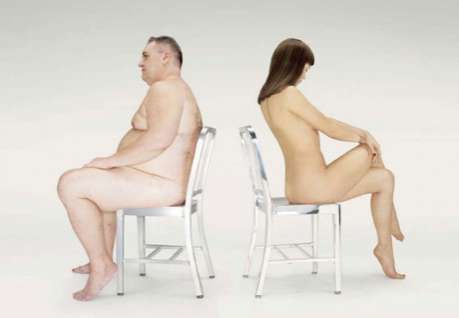 Happy Hotelier — February 25, 2008 — Naughty
References: emeco.net & chairblog.eu
Share on Facebook Share on Twitter Share on LinkedIn Share on Pinterest
While looking at the March 2008 edition of Wallpaper* Magazine, my eye fell on a new ad with nudes seated on an Emeco Navy 1006: One brushed, used by Petty Officer FTG3 Tony Cost, and one polished, used by Parisienne socialite Amelia-Louise Enright.

The ad is by Wieden Kennedy, brand champion to many, who had assembled a creative team featuring Neil Wilder, celebrity photographer and maniacal visionary.

This is the first time I see full but decent nudity used for a chair ad.

In an older ad they used to emphasize the solidity of the lightweight chairs with some weight in stead of nudity.

About Environmental Issues
Emeco claims: The content of recycled aluminum used to make Emeco chairs is 80%. Of the recycled aluminum, half is post consumer (soft drink cans) and half is postindustrial (manufacturing scrap). Chairs made out of virgin aluminum have an energy density that is 17 times higher than that of Emeco chairs. Well I like it. It is, of course, only half of the story as everybody knows aluminum is a hell of an energy gobbler before it reaches usable state. I see another slogan here: Drink and you will have half a chair:-)

I add two photos of the Emeco Navy 1006 Chairs: The Brushed one and The polished one