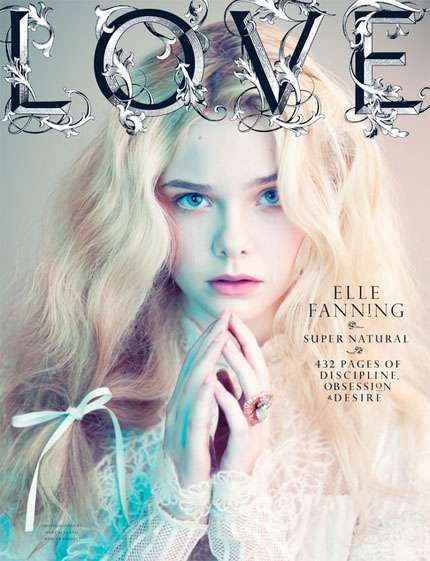 The Elle Fanning LOVE Magazine Cover Looks Like a Dream

Souzan Michael — July 26, 2011 — Fashion
References: fashionista & catwalkqueen
Dakota Fanning's little sister Elle has been making an enormous splash in the fashion world lately, and now the Elle Fanning LOVE magazine cover can be added to her list of impressive fashion feats. She was recently photographed as the face of the Marc Jacobs Fall 2011 campaign.

The cover of LOVE magazine's sixth issue was shot by Mert Alas and Marcus Piggott of fashion photography legends Mert and Marcus. It is one of five covers that are being released for the issue.

The ethereal look that Elle is sporting has become synonymous with her style and it is only fitting that the rest of the issue pays artistic homage to anything and everything supernatural.

The Elle Fanning LOVE magazine cover is extremely reminiscent of the fashion in the cult-favorite film 'The Virgin Suicides,' with her pale skin, flowing blonde hair and romantic, pastel-shaded clothing. The rest of the spread is sure to be stunning.
4.4
Score
Popularity
Activity
Freshness