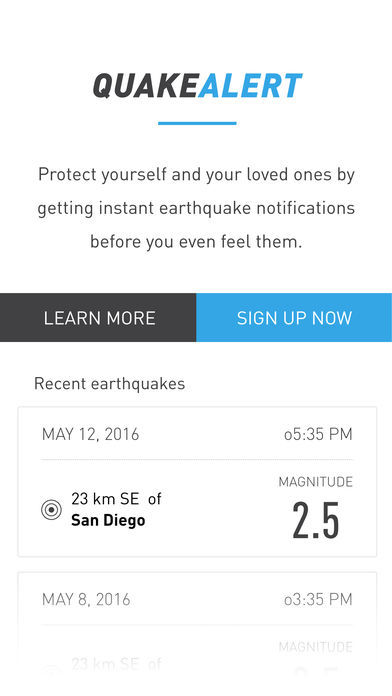 'QuakeAlert' Promises to Bring Early Warning Systems to US Residents

Justin Lam — January 8, 2018 — Tech
References: itunes.apple & wired
Share on Facebook Share on Twitter Share on LinkedIn Share on Pinterest
Early warning systems are pivotal safety tools used by many countries to warn residents of an incoming earthquake. Unfortunately, the US is sorely lacking in any of the systems, however, a new app created by Early Warning Labs may just change this fact. The app, entitled QuakeAlert, was developed by the Santa Monica-based Early Warning Labs in conjunction with USGS, Caltech, University of California Berkeley, University of Washington, University of Oregon and University of Southern California.

QuakeAlert is still unavailable to the public, but users may sign up to beta test the app. QuakeAlert was built using the existing software pioneered by the ShakeAlert app. While ShakeAlert can track certain vibrations caused by earthquakes, it is still unable to work as an early warning system to users. QuakeAlert works by collecting the data garnered from ShakeAlert and uses it to warn users of impending earthquakes as the waves generated by the quake travel to a specific location. Early Warning Labs intends to slowly roll out the app in 2018 in the hopes that users will be better educated and prepared for any catastrophic earthquakes.
2.3
Score
Popularity
Activity
Freshness
Jeremy Gutsche Keynote Speaker