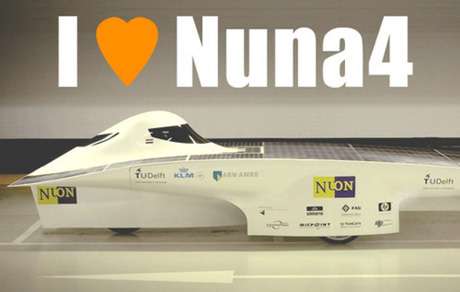 The Australian Panasonic World Solar Challenge is a bi-annual 3,000 km solar car race from Darwin to Adelaide, Australia. Teams of university and college students compete to design and construct the fastest vehicles propelled on solar energy alone that can endure the hefty distance. The 2007 challenge counts 45 entries from 21 countries. The first challenge took place in 1987, making this year's event its 20th anniversary.

Recently Nuna4 has been unveiled. It will compete under extreme weather conditions, will have to navigate between traffic on the road â€“ with the notorious and dangerous Australian road trains - as well as avoiding kangaroos and other obstacles.

The team has successfully come through its wind tunnel testing sessions. Its top speed is reported to be over 140km/hr. Team members are from the departments of Aerospace Engineering, Design Engineering, Mechanical engineering, Electrical Engineering and Shipbuilding. Some computer wiz kids are to be added.

Finally the Yellow solar car is the competition's entry from the University of Michigan's team named Continuum.
2.7
Score
Popularity
Activity
Freshness
Get the 2021 Trend Report FREE