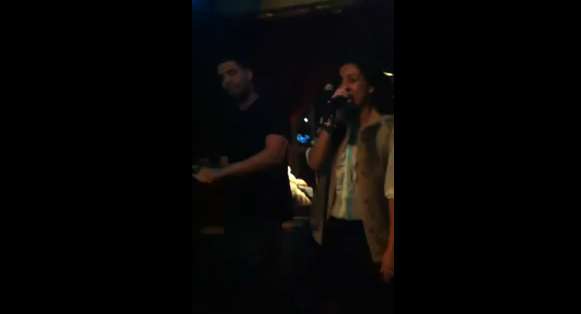 The Drake 'What's My Name' Karaoke Video is Adorable

Earlier this week, Canadian rapper Drake made a surprise appearance at a bar in Los Angeles called The Saddle Ranch. An international student from Kuwait named Dalal, who is a regular at the bar's Karaoke Tuesdays, was set to perform the hit song 'What's My Name' by Rihanna and Drake, when the rapper joined her onstage for a duet.

"Drake jumps up with his bodyguard behind him and was like ‘Wait, I thought I was going to do the song with you.’ I just got lost in the moment and thought, ‘Whatever happens I don’t care.’ It was a total Hollywood moment," she explains.

Check out the cute Drake 'What's My Name' Karaoke video and next time you're headed out to a karaoke bar, make sure to wear your best outfit because you never know who you'll run into.
0.9
Score
Popularity
Activity
Freshness
Attend Future Festival