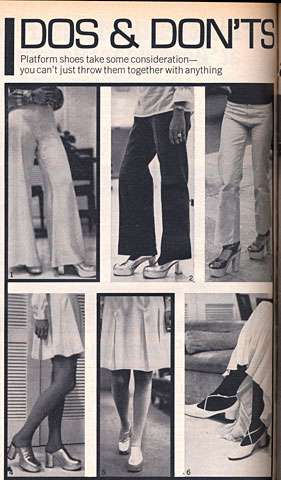 Surprisingly, Do's and Don'ts Haven't Changed Much Over Time

wang fangqing/ Frances Wang — March 4, 2009 — Fashion
References: glamour
Share on Facebook Share on Twitter Share on LinkedIn Share on Pinterest
Do’s and Don’ts, the renowned column of 70-year-old Glamour magazine, shows us exactly what have been, and are being, considered as “appropriated daily looks” over the past seven decades. Turned out, our taste in fashion hasn’t changed so much.

For example, the frock Ginger Rogers is wearing in the gallery looks fabulous, but it’s only for Rogers-Astaire dance rather than for an evening out, or so said the editors back in 1939. Similarly today, you still have to think twice before copying glamorous looks from Hollywood stars.

Another example is once-again popular platform shoes, which were widely adored back in the 1970’s. The editors back then noted that throwing high platformed clogs together with a thigh-length short skirt was a DON’T, a rule that continues to apply today too.
2.2
Score
Popularity
Activity
Freshness
Attend Future Festival Virtual