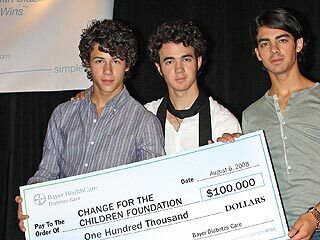 The cause is close to the hearts of the Jonas Brothers, because 15 year-old member Nick Jonas was diagnosed with Type 1 Diabetes from the age of 13.

â€œWhen I was first diagnosed, I did think, 'Why me?'â€ explained Nick in a press conference. â€œI had a great medical history. I had never stayed in the hospital before. I didn't know anybody with diabetes. So it was a shock.â€

Nick confessed that he did not have anyone to look up to or seek encouragement from. That is why he and his brothers are launching this partnership, to offer support and encouragement to all the young kids suffering from diabetes.

â€œI had a day when my sugar was out of range, and I sat down at the piano and wrote it in 20 minutes,â€ Nick said of "A Little Bit Longer" which is burning the iTunes charts right now. â€œAnd it was because I had this strong inspiration. A lot of people have told me it's inspiring.â€

â€œTo be able to live my dream by being in a band shows that anything is possible,â€ Jonas said. â€œEven if you have diabetes.â€