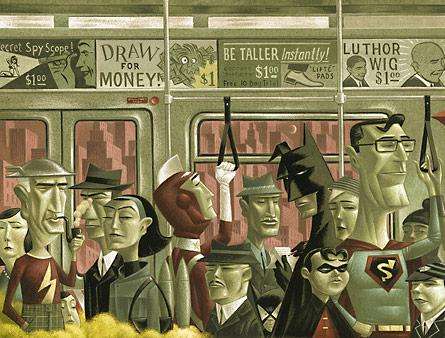 Jason Soy — September 11, 2011 — Pop Culture
References: blog.deangorissen & geektyrant
Share on Facebook Share on Twitter Share on LinkedIn Share on Pinterest
Superheroes can indeed get tired of omnipotent powers and whizzing through the air -- that is, according to the premise of this Dean Gorissen mural of familiar crime fighters commuting on a subway train. The concept for the painting would actually make for an awesome public prank: having Batman, Superman, Wonder Woman, the Flash and the Green Lantern casually standing in a train would probably perplex pedestrians to no end.

Dean Gorissen is a writer and illustrator whose work has been adapted into an Emmy Award-winning animated series. His career as an illustrator is nearing the double-decade mark, but to receive an accolade such as that at any age is truly an honor.

Implications - Consumers enjoy seeing humorous depictions of superheroes because it humanizes these grandiose, idealized pop culture characters. Consumers respond more positively to things and people to whom they can relate rather than simply admire. Corporations may similarly convey themselves as personable in media campaigns to entice consumers into doing business with the company as opposed to with competitors.
2.7
Score
Popularity
Activity
Freshness
Get the 2021 Trend Report FREE