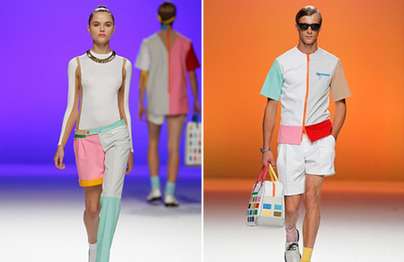 Meghan Young — October 26, 2011 — Fashion
References: davidelfin & itsnicethat
It looks like one fashion designer happened to jump into a rainbow (perhaps even a double rainbow?) only to come out the other side with the Davidelfin SS12 collection. Quirky, colorful and full of character, this is definitely a line that grown-up Rainbow Brite would be more than proud to rock.

The new year is definitely going to be filled with whimsy if the Davidelfin SS12 collection has any say in the matter. As though taking the colorblocking fad of early 2011 to the next level, it introduces unique cuts and fits as well as some risque sheer shirts for men, which was also quite popular for women these last few months.

The Davidelfin SS12 collection happens to also have a sci-fi feel to it. Yet, instead of being typically dark and dystopian, it is oddly cheery and full of hope.
2.2
Score
Popularity
Activity
Freshness