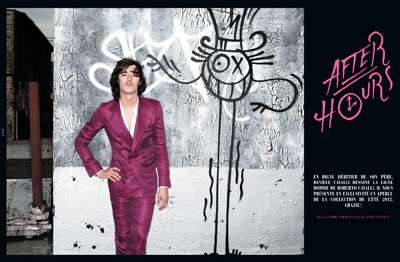 Daniele Cavalli Models His Own Designs for L'Officiel Hommes Paris

Katherinev123 — October 31, 2011 — Fashion
References: jalougallery_ & designscene.net
Share on Facebook Share on Twitter Share on LinkedIn Share on Pinterest
Daniele Cavalli, the 25-year-old son of designer Roberto Cavalli, is definitely following in his father's footsteps. In charge of the Italian fashion house's men's line, Daniele Cavalli has created an impressive line for Spring 2012. Cavalli models the pieces himself in this spread for L'Official Hommes Paris Issue #25.

The editorial is titled 'After Hours,' and Daniele Cavalli looks comfortably sleek in his series of haute suits, which range in color from bright fuchsia and royal blue to the more typical white and charcoal. Photography for the shoot was done by André Saraiva, who is also the magazine's newly appointed creative director. The spread was styled by Tom Guinness, L'Official Hommes Paris' fashion editor.

According to Style.com, Daniele Cavalli's designs for the Roberto Cavalli 2012 menswear line were inspired by the Riviera in that it is a a meeting place for people from around the world; thus, he has merged American apparel, such as jeans, with more European elements like leather.
3
Score
Popularity
Activity
Freshness
Access Advisory Services