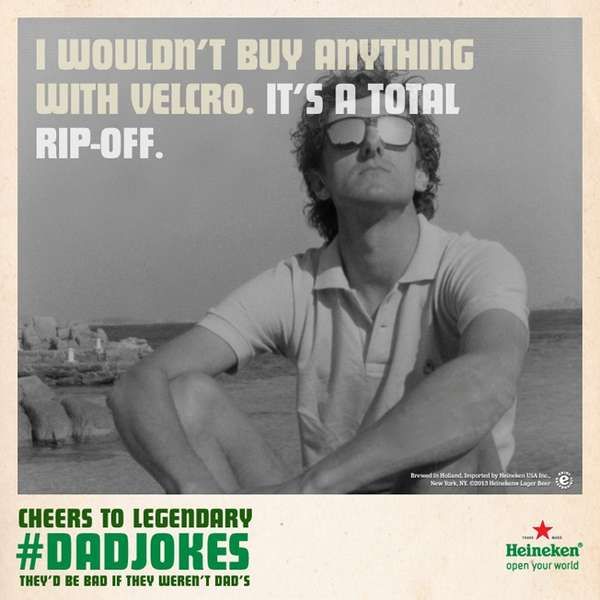 This campaign showcases the punniest of dad-worthy jokes. For example, one of the print ads shows a vintage picture of a father, with this joke superimposed over it: "I wouldn't buy anything with Velcro. It's a total rip-off." This joke is so painfully cheesy and pun-filled that it could only ever be said by a well-meaning, but outdated, father.

Heineken has also incorporated social media into the 'Legendary Dad Jokes' campaign. Each print ad encourages Heineken fans, in bright green letters, to use #DADJOKES in their tweets. If Heineken reaches trending status with this hashtag, it will definitely be a successful marketing campaign.

While this campaign might appear as if it's making fun of dads, its tagline makes it clear that this campaign has nothing but love for dads everywhere: "Dad Jokes: They'd be bad if they weren't dad's." With this sentimental statement, viewers and potential Heineken consumers will automatically recall many instances in which their dad embarrassed them somehow, with a bad joke or an awkward comment, but on which they now think fondly. It's a clever campaign, and the perfect way to pay tribute to Father's Day.
3.6
Score
Popularity
Activity
Freshness
Attend Future Festival