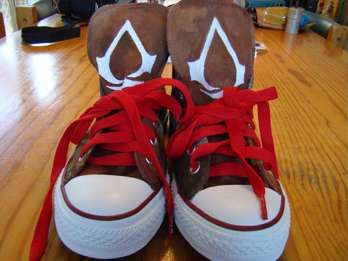 The Creed Converse Shoes by DeviantART User Technofortomcats are Divine

Erin Kirkpatrick — November 2, 2012 — Tech
References: technofortomcats.deviantart
Share on Facebook Share on Twitter Share on LinkedIn Share on Pinterest
For individuals who appreciate true artistry and precision, the Creed Converse Shoes by DeviantART User Technofortomcats will astound your eyes. What started out as a project, for one DeviantART User who preferred an assassin-inspired embellishment rather than stark white shoes, has caused a stir among Internet users. Those who have seen this user's designs are already eager and encouraging Technofortomcats to work out a deal with Ubisoft and Converse and market the shoe design. It seems this user already has fans who are willing and ready to shell out money for such precise and skilled craftsmanship.

The Creed Converse Shoes by DeviantART User Technofortomcats transforms the classic high-top sneaker into a style of footwear that will surely incite some jealous stares. The shoes feature Arabic-themed script, the famous tag line of the game "nothing is true," the Assassin's Logo and names. All in all, these shoes are jam-packed with breathtakingly accurate and intricate detailing that bear an unmistakable resemblance to the band of highly skilled assassins.
2.8
Score
Popularity
Activity
Freshness
Get Trend Hunter Dashboard