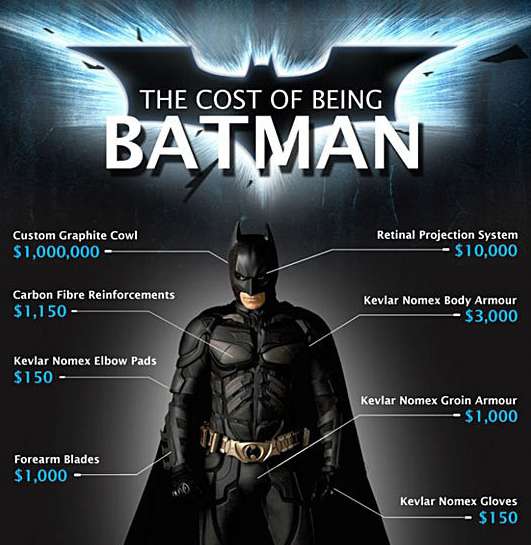 The 'Cost of Being Batman' Infographic Totals the Astronomical Number

Jennifer Gosnell — July 23, 2012 — Autos
References: visual.ly & buzzfeed
Share on Facebook Share on Twitter Share on LinkedIn Share on Pinterest
The 'Cost of Being Batman' infographic details just how expensive it is to be a successful crime-fighting vigilante. While the fictional Bruce Wayne can afford to be a spendy crime fighter, the real life costs of being Batman, or any superhero for that matter, are far out of the reach for most. The Batman infographic details the costs between all of Batman's tools and access to total an astronomical amount -- enough for a small army even.

Between the luxurious and well-equipped armour, high-tech retinal projection system, vehicles, residence, gadgets and training, the total estimated cost of a real life Batman would be well over $682 million dollars. Ultimately, the cost of being Batman? Probably out of your price range.