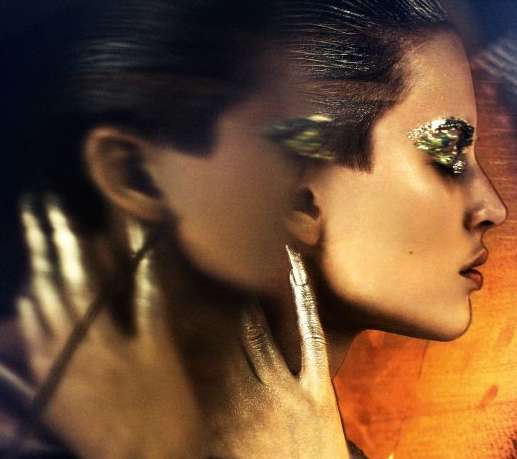 Jordy E — June 14, 2012 — Pop Culture
References: contributormagazine & xaxor
Share on Facebook Share on Twitter Share on LinkedIn Share on Pinterest
The Contributor Magazine Spring/Summer 2012 photoshoot, featuring models Linnea Regnander and Ellinore Erichsen, does an excellent job of showcasing a futuristic take on fashion. Gilded eyebrow jewels and an assortment of glitter has been used here to give off an otherworldly, if not robotic, vibe.

This Cotributor Magazine editorial was executed by photographer Peter Gehrke. Gehrke's ability to stray away from the mainstream is readily apparent here, especially given the expert way in which he blurred both Regnander and Erichsen's faces. And while the images do have a certain hazy quality about them, they are at the same time notably sharp with attention to the production's use of sterling silver tresses, reflective eye shadows and elongated nails amid the embossed snakeskin-esque backdrop.
4.3
Score
Popularity
Activity
Freshness
Jeremy Gutsche Keynote Speaker