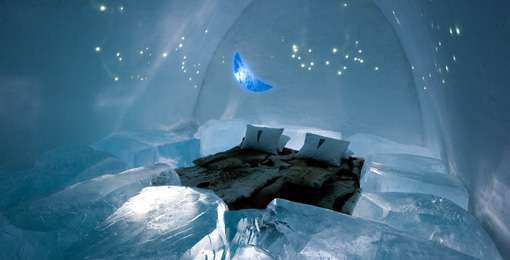 Hayley Grieve — March 18, 2009 — World
References: inventorspot
Share on Facebook Share on Twitter Share on LinkedIn Share on Pinterest
Nothing is more of a break from the boring than a perfectly sculpted ice hotel. The very idea of sleeping in a luxury freezer is odd and exciting.  Trendhunter spotted the world’s first ice hotel in Jukkasjärvi, Sweden, and the resort has melted and been re-built every year since. The incredible architecture this April is stunning as the competition becomes more and more fierce to be a featured designer.

Especially beautiful is the “Mush-room” with intricate fungus carvings, and the night sky replica complete with moon and glittering stars by Japanese woodworker Hiroyoshi Saka. The Absolute Icebar, named after the famous Swedish vodka, is also a necessary fixture.

It must be sad to watch all that hard work melt away into the Torne River in the end.
3
Score
Popularity
Activity
Freshness
Access Advisory Services