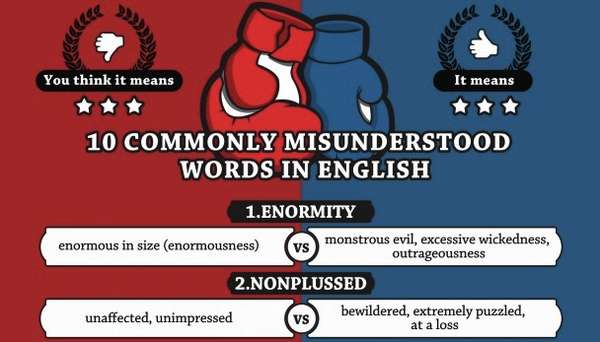 Corinne Guirgis — July 3, 2011 — Social Good
References: grammar.net & dailyinfographic
Share on Facebook Share on Twitter Share on LinkedIn Share on Pinterest
This Commonly Misunderstood Words infographic is an incredibly useful tool, even for those whose first language is English. English is one of the hardest and most complex languages in the world, and confusing the definitions of certain words is easy -- especially in a world where spell check and online thesauri have made hard-copy dictionaries virtually obsolete learning tools.

There are certain words we pick up in casual conversation or from television and movies where a particular definition is assumed based on the context within which it is heard. This infographic outlines the top 10 of these words with their incorrect and correct definitions.

Implications - The global influence of the English language, in social interaction and in business, is undeniable. Commonly referred to as one of the most difficult to learn languages in the world, even people whose native tongue is English commonly mistake the meanings and spellings of certain words. In the global business world, clarification on these misunderstandings is a necessary part of success.
2.9
Score
Popularity
Activity
Freshness
Get Trend Hunter Dashboard