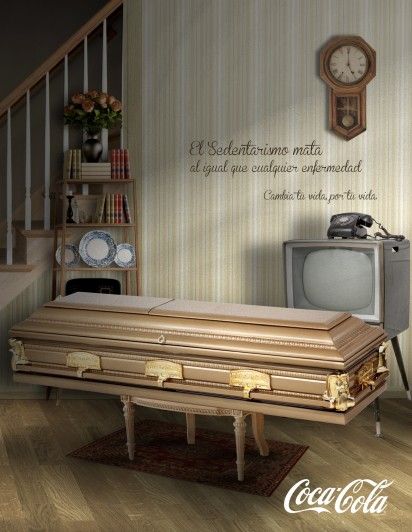 The Coca-Cola Ministry of Health Campaign Warns Against Sedentary Lifestyles

Meghan Young — December 3, 2013 — Marketing
References: athostbwa & ibelieveinadv
A lot of attention has been brought on the subject of sedentary lifestyles due to their extreme negative effect on health and the Coca-Cola Ministry of Health ad campaign issues yet another warning. It reads, "A sedentary lifestyle kills like any disease. Change your life for your own life." What really drives the nail in the coffin, so to speak, are the actual coffins in the prints. They have taken the place of traditional seats including couches and office chairs.

The Coca-Cola Ministry of Health ad campaign was conceived and executed by ATHOS\TBWA, an ad agency based in Santa Cruz, Bolivia. It was art directed by Fernando Fernandes with copy writing by Alicia Sardán. Although clearly surreal, the message is a strong one.
3
Score
Popularity
Activity
Freshness