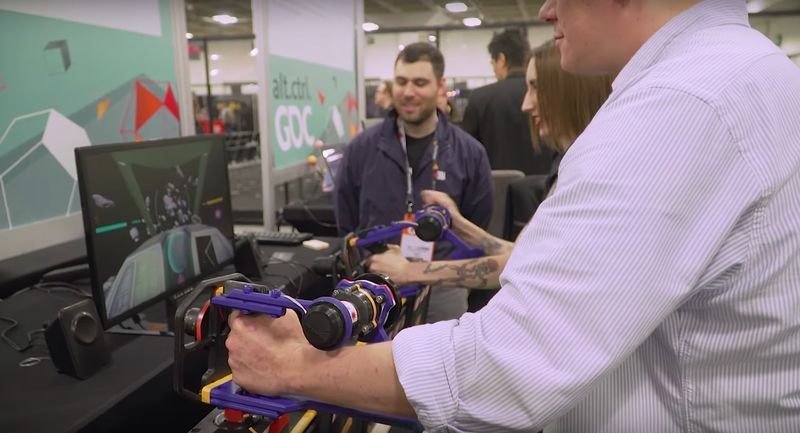 Justin Lam — March 27, 2018 — Tech
References: engadget & gamasutra
Share on Facebook Share on Twitter Share on LinkedIn Share on Pinterest
Clunker Junker is a unique new video game that forces players to interact with a spaceship using a massive controller and set-up. The game currently requires two LED-adorned arm cranks, four crates with glowing lights, doors that respond to gameplay and a laptop to run everything off of. The set up is massive, and will most likely stop most players from ever owning the game, but each piece makes the game amazing and captures a frantic pace with true immersion.

Clunker Junker is a cooperative space shooter designed to be played by two people. Each crew member utilizes a handheld, gun-like controller that stretches from palm to elbow. The controller is designed to be held in the left hand, with a crank on the right side, a navigation cube on the base and an LED spout in the front. Players will use the entire controller when playing the game and must engage with it in several aspects to control, repair and combat with their ship. The gameplay is fast-paced and communication becomes a driving force in Clunker Junker.
1.8
Score
Popularity
Activity
Freshness
View Innovation Webinars