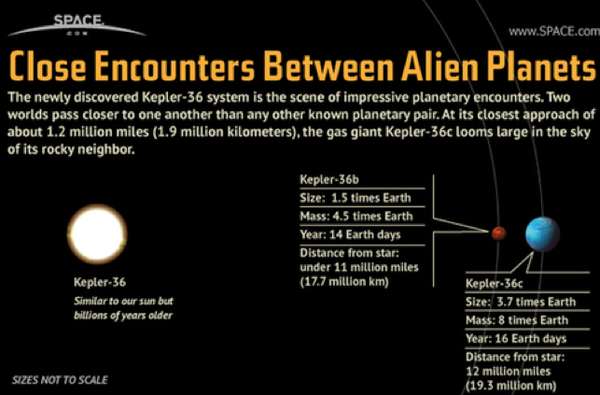 The 'Close Encounters Between Alien Planets' Infographic is Celestial

The most interesting fact about the galaxy is that two of its planets pass more closely by each other than any other planets in outer space. The two planets pass by each other with a mere 1.2 million miles separating them -- a distance that seems immense by normal standards but is actually very close by intergalactic standards.

The two planets, Keplar-36b and Keplar-36c, are also tremendously large in comparison to other planets and are 1.5 and 3.7 times of the size of planet Earth, respectively. Furthermore, when 36-c appears at its closest point to Earth every 97 days, it appears to be about 2.5 times the diameter of the moon.
3.1
Score
Popularity
Activity
Freshness