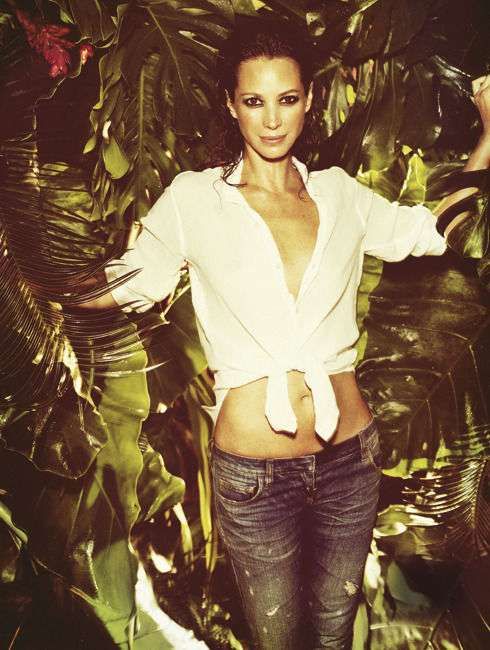 Corinne Guirgis — June 7, 2011 — Fashion
References: madame.lefigaro.fr & fashiongonerogue
Share on Facebook Share on Twitter Share on LinkedIn Share on Pinterest
The Christy Turlington Madame Le Fiagaro editorial, shot by Ellen von Unwerth, is steamy for more reasons than its tropical jungle setting. The model of the 90s is wearing sensual beachwear accompanied by denim, and displays some shockingly stunning flexibility in the June issue of the French mag.

The cover caption translates to "Christy Turlington: Beautiful, zen and engaging," and I couldn't have come up with a better three words to describe the model or the editorial.

In the mid-90s, when Turlington was at the peak of her career along with fellow models Cindy Crawford, Naomi Campbell, Linda Evangelista and Tatjana Patitz, it was Turlington who invented the idea of a top model. Despite covering smaller publications in this late stage of her career, Turlington still maintains the confidence that made her a top model to begin with and this shoot is proof!
4
Score
Popularity
Activity
Freshness
Get the 2023 Trend Report FREE

Death Of The Supermodel
An Era Ends

9-Model Magazine Covers
Vogue Showcases the Faces of the Moment