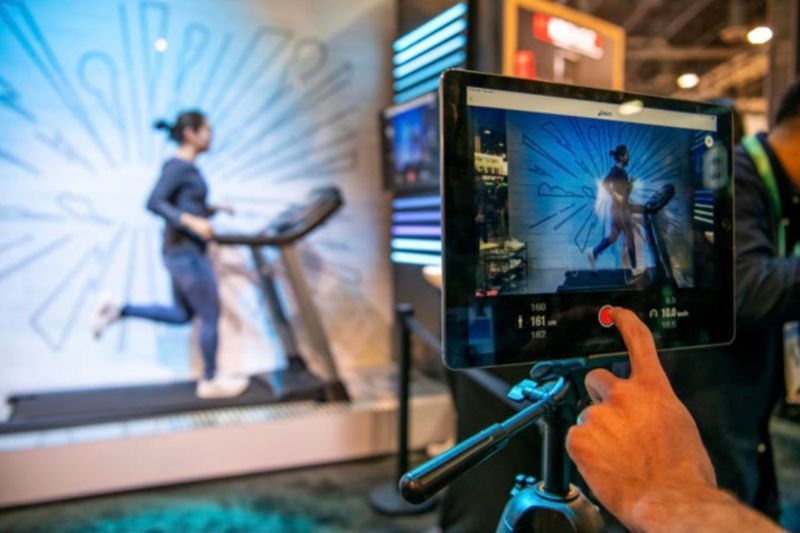 Ellen Smith — January 23, 2020 — Fashion
References: corp.asics & asics
Share on Facebook Share on Twitter Share on LinkedIn Share on Pinterest
On January 7th, innovators, inventors, and industry leaders flocked to Las Vegas for the annual Consumer Electronic Show, and while most were sound asleep preparing for the day’s activities or recovering from a night in front of blackjack tables, I was tying up the laces of my running shoes. A 5km race at 6am isn’t how most people envision their first morning in Vegas, but when ASICS gives you a new pair of shoes and asks you to run, you run.

After Yasuhito Hirota, ASICS’ President & COO spoke a few words of encouragement, the runners were off. While I couldn’t keep up with the company’s FrontRunners, I was surprised to find I wasn’t as tired from the exercising as I thought I would be, a fact which I can attribute to the shoes I was wearing. ASICS’ GLIDERIDE sneakers have been scientifically proven to save energy, allowing athletes to run longer while expending less energy. The GLIDERIDE shoe works in tandem with its FLYTEFOAM and GEL technology to reduce the movement of the ankle joint, enhancing efficiency. These factors combined with the shoe’s curved outsole that propels the foot forward, is what I credit with a better-than-expected race time.

This race was particularly special for ASICS as it kicked off CES 2020 while solidifying their acquisition of Race Rooster, a race registration platform that, much like ASICS’ ethos, prides itself on saving the time and energy of those involved in running events, all while disrupting the sports world with its digitization. Through this acquisition, ASICS is able to better serve the running community, while increasing its digital footprint -- a move which would become fully realized at CES as the sportswear company was set to lift the curtain on their latest innovation.

An interactive treadmill and large multi-paneled screens served as the backdrop at the ASICS Energy Lab for CES. There, it was announced that the sportswear company would be launching its first smart shoe prototype -- a piece of sports technology that came to fruition through a close partnership with the Japanese-based startup no new folk studio (nnf). Working alongside the Institute of Sport Science (ISS), nnf was able to seamlessly embed its ORPHE TRACK sensor in the sole of ASICS’ EVORIDE shoes. This enables the running shoe to offer the wearer real-time feedback, as it tracks the runner’s stride, stability, strength, and more.

I had the opportunity to test the smart shoe prototype myself, and for the second time that day, I found myself tying up the laces of my running shoes. A minute or-so on the interactive treadmill was all the shoes needed to receive the data points that would determine my running abilities. In fact, the data transfer was so instantaneous, that I was still catching my breath as an ISS scientist walked me through my results. I scanned a barcode and quickly received a link to the full report so I could go through the data in more detail on my own time. The report informed me that I have ‘Average’ running skills and offered extensive details on how I could improve my abilities. For example, it explained that I'm “wasting the kicking force” and that I need to keep my feet closer to my body when hitting the ground to avoid the excessive motion, which is partly responsible for excessive energy expenditure. Among other things, it advised me to continue to work on my hamstring strength in order to improve my form -- actionable advice which I felt I could confidently achieve.

Unsurprisingly, the ASICS Energy Lab was consistently buzzing and a hot topic of conversation for conference go-ers, attracting curious bystanders, footwear enthusiasts and marathon runners alike. Among the excitement, I was able to sit down with Kenichi Harano, head of ISS. While we discussed the importance of balancing aesthetics with technology, overcoming industry-specific challenges and the direction of sport technology, it’s what was said about the brand’s overarching mission that really stood out. According to Harano, ASICS Institute of Sport Science wants to create products for everyone, not just top athletes. He said that he looks toward the automotive industry for inspiration, because like shoes, cars get people where they need to go.

Everyone’s journey from point A to point B is different; for some, it’s a marathon and for others it’s a 5k. Regardless, these shoes get people across the finish line, and ASICS is the brand that supports them along the way.
7.5
Score
Popularity
Activity
Freshness
Attend Future Festival