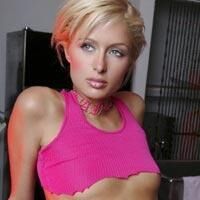 19-year-old- vanov was already nicknamed Paris by her friends for her resemblance to the socialite, but she really wanted to be her in every detail.

She was reported as saying, "They already call me Paris Hilton. So now I want to be her. Everything. Lips, breasts and all the rest."

The surgical procedures included plumping up her lips, getting a boob job and slimming down her waist.

In her quest to be "100%" Paris Hilton, Ivanov has forgotten that there is only one Paris Hilton, and she doesn't live in Russia. A psychologist, Mikhail Vinogradov commented, "A wish to look like somebody else and make it happen can be seen as a mental disorder."

NOTE: The images in the gallery are of the real Paris Hilton.