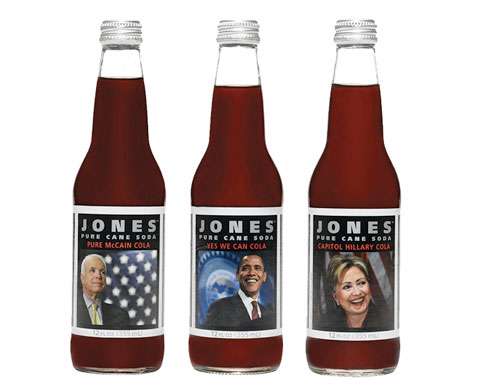 Jones Campaign Cola 2008 Has All the Candidates

Aspiring pundits can purchase custom, limited-edition six-packs or twelve-packs to cast a liquid vote for their favored candidate. There is a â€œYes We Can Cola" for Barack Obama lovers and "Pure McCain Colaâ€ for the John McCain camp. For the stubborn nostalgics, there's â€œCapitol Hillary Colaâ€ and â€œRon Paul Revolution Cola.â€ These oh-so-cool collectible bottles feature the faces of your chosen dream candidate.

Jones' website also tracks the number of purchases and updates it frequently to display who's up, who's down, and who's seriously draggin'. In this virtual polling booth/chugging contest, Obama is winning by a considerable margin, and Ron Paul outsells McCain.