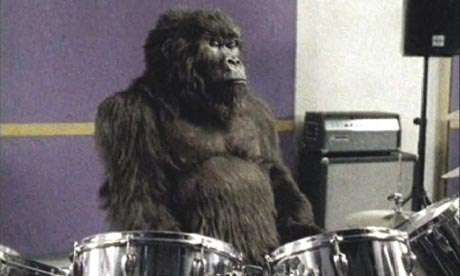 Guerilla marketing is a low-budget, unconventional spin on marketing that often doesn't feature the actual product at all. Also known as stealth marketing, this type of campaign tricks the consumer into thinking about a certain product, without them realizing they have been exposed to commercial advertising.

Cadbury pokes fun at the marketing tactic with its effective new video ad.

"The film opens with a title, 'A Glass And A Half Full Productions presents'", the Independent reported. "Then we hear the opening bars of the Phil Collins hit 'In the Air Tonight'. The camera pulls back slowly to reveal that the new face of Cadbury Dairy Milk is in fact a gorilla. The effect is spooky and primal. As the big drum break starts, the camera pulls further back to reveal that the gorilla is hammering an enormous drum kit in a karaoke-style bangalong."

"It's such a pompous piece of music and the thrashing of the gorilla is so self-absorbed that the effect is hilarious. It's short-form comedy just like one of those funny clips you see on YouTube. But it seems to have precious little to do with chocolate."

"People don't want advertisers droning on and on about their products any more; they want to be entertained."

It's not just clever marketing; Cadbury has a message in there, too.

"The entire commercial is a product metaphor. 'Chocolate is about joy and pleasure. For years Cadbury has told us that it was generous, through the glass and a half strap line. We thought, don't tell us how generous you are; show us. Don't tell us about joy; show us joy.' That's just what the campaign tries to do. 'We've created a branded space in which Cadbury's can be generous in bringing joy.'"

Cadbury is hoping that the new campaign will help build "long-term brand values" while also upping short-term sales. "You can't advertise chocolate in the summer," the Independent quoted a Cadbury rep. "'Easter and Christmas are separate markets, so the only chance to build the brand comes in late spring. This campaign will drive sales for the year.'"

No real animals were used in the video -- it's only a man in a hairy gorilla suit explained a Cadbury rep who says he's unsure "How he will apologise to the nation if the new commercial sparks a Phil Collins revival."

The Independent concludes, "The bigger risk is that the campaign is too far removed from conventional chocolate advertising to be effective. As one veteran Cadbury hand put it, 'They get it right when the ads make you drool. Without chocolate, Cadbury ads lose their sensual appeal and along with that go sales.'"
6.4
Score
Popularity
Activity
Freshness
Access Advisory Services