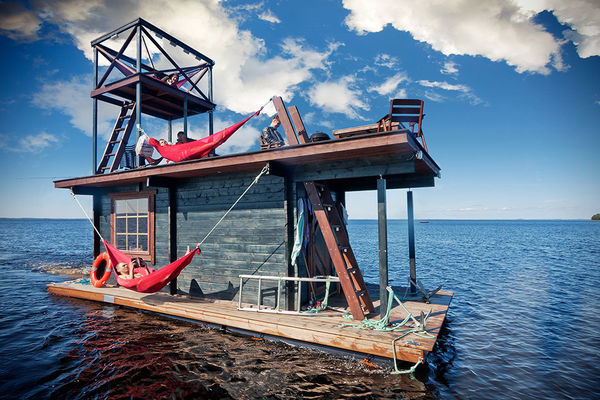 Megan Facciuolo — April 9, 2014 — Unique
References: facebook & hiconsumption
It has become very popular for homes to have built-in saunas, but it's not likely the same could be said of rafts -- they don't usually have such a rejuvenating feature. When you picture a raft, you picture a flank of wood or the blow-up boats you take on white water rafting expeditions. However, 'Saunalautta' (incredible sauna in English) is a rare breed of rafts because it actually features a built-in sauna.

This over-achieving raft was built by a group of friends living in Joensuu, Finland and has numerous elements of relaxation built onto it. This raft looks more like a floating playground than a raft. In addition to the sauna, it contains three hammocks and two levels for sunbathing and hanging out.

The brand should really think about making more of these and selling them to those who don't have as much time to make such a exquisite floating device.
6.1
Score
Popularity
Activity
Freshness

Self-Spoiling Spas
The Personal Sauna Lets You Personalize the Pampering