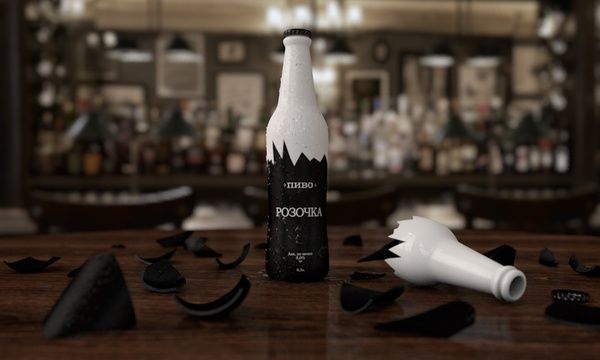 Amelia Roblin — March 7, 2014 — Lifestyle
References: behance.net
Share on Facebook Share on Twitter Share on LinkedIn Share on Pinterest
It seems as though there was some anger designed into Broken beer packaging, for the detailing on the label suggests the potential break marks that the bottle might acquire if smashed a certain way. Picture a heated bar fight and men holding their beer bottles by the necks, shattering them against tables and then holding the resultant jagged weapons. What they would have left is the white portion of this vessel.

Constantin Bolimond finished the rest of the glass in a matte black, creating a great deal of tonal conflict between the two distinctive halves. With a single bottle standing before you, however, another image might come to mind. Broken beer packaging comes to resemble a snowcapped mountain, perhaps in Siberia. The Russian text is kept to a minimum, making the overall visual impression quite clear-cut and impactful.
4
Score
Popularity
Activity
Freshness
Get the 2021 Trend Report FREE